I once had a beloved friend send me an article where someone actually called it “evil” to seriously advocate that “everything happens for a reason”. And I get it. I get why they should think like that. Anything that should make it “reason..able” that people do unconscionable things and think it reason…able that ghastly things happen to good people, defenceless small children and animals – anything that could even faintly imply that … ugh… No, I get it. How can we explain some of the incredibly horrifying things that happen in the world and glibly say to ourselves “everything happens for a reason.” I can see the sheer arrogance of that.

But it’s not a contradiction at all. The RIGHTNESS doesn’t in any way take away from the WRONGNESSES that I talked about in the first paragraph – the rightness simply forms part of the whole.

Pause on that for a minute.

“The rightness doesn’t in any way take away from the wrongness, it simply forms part of the whole.”

And in the thousands of times I’ve helped people find it, the answer to each utter WRONGNESS, the RIGHTNESS behind the wrongness, is as unique and as beautiful as every individual that I’ve ever worked with.

The Paradox is an experience

There’s an energy at the heart of that paradox – when we find the balance point between the rightness and wrongness – that is so powerful that it’s hard to comprehend until you’ve experienced it in all its stages. There’s many, many levels of it that range from simple ahaa moments of understanding, to life changing floods of expansive feelings that at the top end of the range goes all the way to intense joy and connection with All things.

This energy at the heart of the Paradox, this flow, opens up all kinds of possibilities – a flood of healing, releasing of old trauma (even super big trauma like PTSD), understanding people events and circumstances in a new way, flashes of insight that enables solving even difficult problems that people think are insoluble, conflict resolution without anyone having to give up anything (did you hear that!) and opening up infinite possibilities in manifesting that’s so powerful it’s a joy to watch it in action.

I get that it’s difficult to understand if you’re in a place of upset or distress about something right now – the plight of the wild horses on our beautiful cards are just one example – but when you find the heart of the Paradox, I promise you – I PROMISE YOU – you’ll find a place of peacefulness and power to influence change in your world and to resolve conflict that will knock your socks off.

We’ve already done a couple of clinics around this Paradox thing, with phenomenal success.  In February we did one called the Paradox of Healing, where 36 out of 44 people experienced profound healing in a group setting and the other in September called The Einstein Factor – where we applied this Paradox concept to business, conflict resolution, navigating our way through difficult circumstances, inventing new things, and life in general.  Every single participant broke through into that place of peacefulness and power to influence change in their world and to resolve conflict that knocked their socks off.

Stick around here and you’ll see the influence of this Paradox work in action all over the place – from our cheap as chips monthly seminars called The Anti-struggling horse revolution,  to our Training Programs.  I’ll look forward to meeting you in there somewhere. 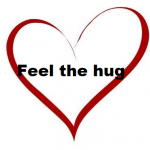 Today’s photo: is our precious Oliver reaching out – a horse with a heart bigger than he is.