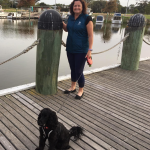 On Friday afternoon my precious sister and her precious dog Molly were attacked by two off lead bull terriers while out for a walk. Kris had surgery yesterday and is recovering well. Molly is also injured and recovering well.

Because I know they’re both recovering well, I feel I can focus on the other dogs, the owners, what happened and how WE can avoid the desperation and terror that these owners also experienced being the cause of such a traumatic event, unable to call their dogs off and the despair that they are going to experience as their dogs are killed by the authorities.

I have a clear vision of the cause and it’s so simple and so easy to avoid.

I’m willing to bet that these dogs were off lead because they pull on their leads and the owner can’t wait to let them off and relieve the pulling on their arms and body.

It’s simple. A DOG WHO PULLS ON THEIR LEAD WHEN OUT FOR A WALK IS ONE WHO THINKS THEY ARE THE PACK LEADER. AND A PACK LEADER IS NOT GOING TO BE CALLED OFF AN ATTACK BY SOMEONE WHO IS LOWER IN THEIR PACK HIERARCHY.

So letting a dog off lead who pulls on their lead is sooner or later a recipe for disaster.

And the fact that they were bull terriers is not really relevant – this could have happened with ANY breed.

How to fix the pulling on the lead thing and become the pack leader.

Our gorgeous Wolfe was a Trojan at pulling on the lead when he first arrived. It was utterly exhausting and although I had used my connection with animal stuff to help other people fix this problem, nothing I did worked. He was a mindless pulling machine. It’s ironic that the problem got fixed when I went looking for the solution for him getting quite aggressive at the house gate. 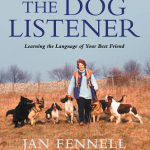 Both problems – the aggression at the gate and pulling on lead problems were solved by Merv and I becoming co-pack leaders, which happened VERY simply when we put into place 4 simple exercises / principles that we read about in a book called The Dog Listener by a lady called Jan Fennell. I’ll put a picture of the book cover here. it’s an enjoyable read as well as being eye opening and VERY useful – and useful is an understatement. It will be life saving for some dogs and heart break saving for some humans.

It’s a simple concept that Jan writes about – four principles – and it only requires some consistency to apply them and the results are outstanding and quite fast. Within two days, with only two of the principles in action, Wolfe had made a huge change at the gate, though I didn’t trust him to be completely reliable that quick and still held his collar firmly when I let strangers in.

At the three week mark (Jan warns about this) he went backwards a little and we jumped on it fast and resolved it quickly.
These days he’s calm and confident and friendly once I say hello to people, though I hear that he’s not keen to let people in when we’re not there.

So, folks, if your dog pulls on the lead it’s a sure sign that they think they’re the boss of you and the repercussions of that whether you have a bull terrier or a chihuaha can, as you see, be devastating. So save yourself causing the kind of terror that Kris and Molly experienced and the heart breaking despair of having to hand your dogs over to get killed.

And it might sound weird after all that shocking stuff – but have fun fixing it, with the combination of Jan’s principles AND with the same Feel that you use for your horse – because it IS fun and IS rewarding to give your dog so much more confidence and contentment in their life like Wolfe has.

Today’s photo is Kris and Molly out and about on one of their many trips around Australia, taken off her Facebook page.