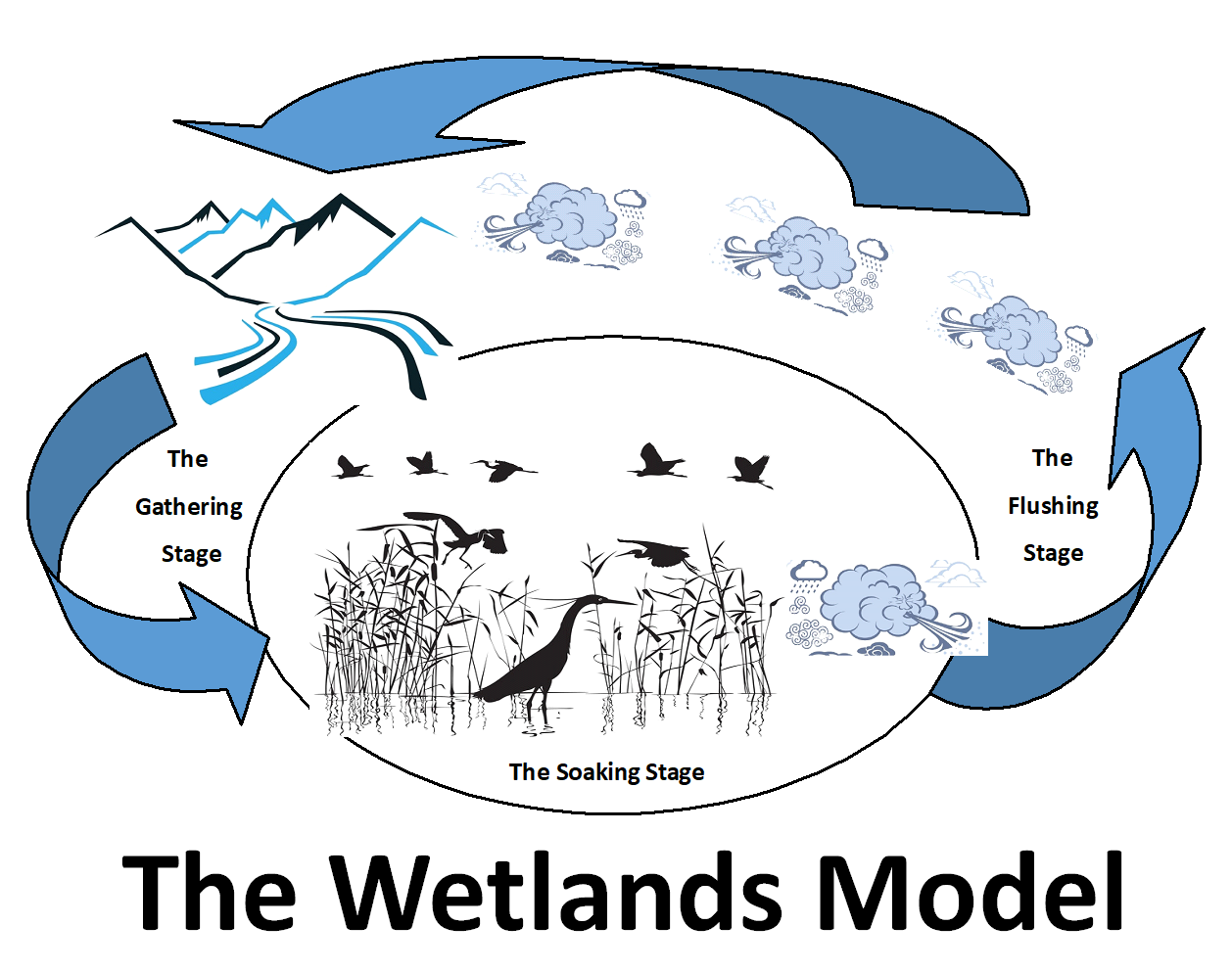 The Wetlands Model is sustainability in action – environmentally, economically, socially, even in business.

The Wetlands Model is a metaphor that has been developed from a sustainable pattern in nature that is repeated everywhere you look. About 12 years ago I was running a clinic where one of the participants was doing a project for the US government on a major problem with the Alaskan Wetlands. Devoney Lehner developed this model to understand the overall operation of the Alaskan Wetlands, pinpoint the problems and come up with actions to address it. Most importantly, the model pinpointed why the problems were not actually where they thought they were and modeled how they could figure out where the problem REALLY was.

It turned out that M/s Lehner’s understanding of the way water flowed in and out of the wetlands and the circular nature of that, was a metaphor that also works as a model for simplifying the complexities and sustainability of EVERYTHING  – relationships, businesses, an abundance of anything (love, money, happiness) – making it easier to put your finger on the real cause/s of a problem in a way that can create (or re-create in your case) the balance and momentum and sustainability of whatever you’re looking at. 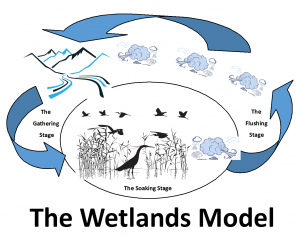 Looking first at the mountains on the top left side of the image of the Wetlands Model and following the circle down and to the right.

Gathering Stage : The rivers and creeks flow water down the mountains and hills and eventually into the wetlands – we call this the Gathering Stage.

Soaking Stage: When the water has arrived in the wetlands, it soaks up that water, absorbs the nutrients, filters the crap out – we call this the Soaking Stage.

Flushing Stage: When the wetlands are full and that part of the cycle is complete, the wetlands flushes the water out into the sea with enough force to create cloud formations – that’s what we call the Flushing Stage.

The momentum of that Flushing Stage, creates clouds and circles them around to the top of the mountains, where the rain falls on those mountains and the water in that rain runs down the streams and rivers to fill up the wetlands again, to complete the cycle back into the Gathering Stage.

In that beautiful balanced FLOW, each stage of the Wetlands supports a rich and varied life.

And more importantly – you can actually SEE the sustainability in that flow.

What M/s Lehner identified, is that a too dry and consequently sick wetlands did not necessarily have its cause in the water Gathering Stage. She identified that the circular nature and essential FLOW of the water meant that what looked like a gathering problem (i.e. even the FACT that there was not enough water coming into the wetlands) could have it’s CAUSE in the Soaking Stage, or have its CAUSE in the Flushing Stage and in those cases, the problem needed corrective action taken in the Soaking and / or Flushing Stages to bring back the balance of the whole.

Let’s dwell on that for a moment.

A too dry and sick wetlands, was not necessarily CAUSED by not enough water coming into the wetlands, even if there wasn’t enough water coming in.  Just as an example, interference by humans imbalancing the Soaking Stage, creating circumstances where the water just ran straight through without any soaking at all, would leave a dry and sick Wetlands. In other examples, where the momentum of the Flushing Stage wasn’t achieved, the clouds didn’t get pushed around to the top of the mountains to rain and be gathered into the streams and rivers. In this case, the Gathering Stage LOOKS like it’s the problem, but the Flushing Stage was the CAUSE.

All those years ago, we realized that this is an abundance metaphor. Like the wetlands, a lack of abundance in anything – love, money, happiness – or a financial problem can have its source on ANY part of the circle.

So a lack of money coming in, is not necessarily a money gathering problem. In fact it’s just as often a soaking up / appreciating problem that has the circle not flowing as it should. And also just as often, the problem is in the Flushing Stage. Or both.

A loving relationship problem can be analysed similarly.  Where is the problem really?   Is it in the receiving of love or the soaking up and appreciating of the other person? Or do we need to do more whooshing of the love back to the other person?

A difficult relationship has the same circular nature.  There are sooo many useful ways to apply this model.

Let’s look at this in relation to a business or organisation.

Thus… money from all kinds of sales, grants, benefactors, philanthropy, the recruitment of staff and the tasks that generate those (including marketing) – are all in the Gathering Stage.

The good feelings generated by sufficient operating capital, staff appreciation, appreciation of the skills and contributions of all the people at every level and supply chain of the business, that whole wonderful idea of farmers getting a sustainable and comfortable return for their work and investment in their land (and the equivalent of that in every business), community involvement / engagement where appropriate, training, the soaking up appreciating the heck out of the money and every thread of all the people in the business chain– that’s in the Soaking Stage.

The value you give to your customers, the prompt and proper paying of staff and suppliers (all the way to the REAL source of supply), donations, your social and environmental currency, and in some organisations even the volunteers, because the value you give is not always in money – that’s all in the Flushing Stage.

The Wetlands Model is sustainability in action

The organism can only grow SUSTAINABLY if each stage is in balance with the whole. Struggle is a result of lurching around with imbalance happening.

Thus, when struggling is happening and difficulties arise and difficult decisions are to be made – where on the Wetlands Model is the problem REALLY coming from?