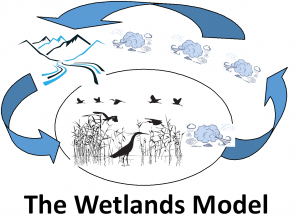 The Wetlands Model is sustainability in action

This pattern is repeated EVERYWHERE in nature and in life.  It’s the very model of sustainability.

An organism can only grow SUSTAINABLY if each stage is in balance with the whole.

Introduction to the Wetlands Model

It’s a metaphor that has developed into what I call the Wetlands Model.  About 12 years ago I was running a clinic where one of the participants was doing a project for the US government on a major problem with the Alaskan Wetlands.  M/s Lehner developed this model to understand the overall operation of the Alaskan Wetlands, pinpoint the problems and come up with actions to address it.  Most importantly, the model helped people to see why the problems were not actually where they thought they were.

It turned out that M/s Lehner’s understanding of the way water flowed in and out of the wetlands and the circular nature of that, was a metaphor that also works as a model for simplifying the complexities of all kinds of things, including business –  making it easier to put your finger on the real cause/s of a problem in a way that can create (or re-create) the balance and momentum in all kinds of circumstances. 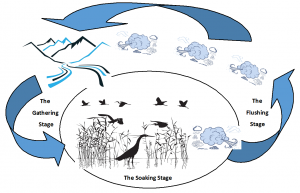 Starting at the mountains on the left side and following the circle down and to the right.

Gathering Stage :  The rivers and creeks flow water down the mountains and hills and eventually into the wetlands – we call this the Gathering Stage.

Soaking Stage: When the water has arrived in the wetlands, it soaks up that water, absorbs the nutrients, filters the crap out – we call this the Soaking Stage.

Flushing Stage: When the wetlands are full and that part of the cycle is complete, the wetlands flushes the water out into the sea with enough force to create cloud formations – that’s what we call the Flushing Stage.

The momentum of that Flushing Stage, creates clouds and circles them around to the top of the mountains, where the rain falls on those mountains and the water in that rain runs down the streams and rivers to fill up the wetlands again, to complete the cycle into the Gathering Stage.

In that beautiful balanced FLOW, each stage of the Wetlands supports a rich and varied life.

What M/s Lehner identified, is that a too dry and consequently sick wetlands did not necessarily have its cause in the water Gathering Stage.  She identified that the circular nature and essential FLOW of the water meant that what looked like a gathering problem (i.e. the FACT IS that there was not enough water coming into the wetlands) could have it’s CAUSE in the Soaking Stage, or in the Flushing Stage and in those cases, needed the corrective action taken in the Soaking and / or Flushing Stages to bring back the balance of the whole.

All those years ago, we realized that this is an abundance metaphor.  Like the wetlands, a lack of abundance or a financial problem can have its source on ANY part of the circle.  So a lack of money coming in, is not necessarily a money gathering problem.  In fact it’s just as often a soaking up / appreciating problem that has the circle not flowing as it should.  And also just as often, the problem is in the Flushing Stage. Or both.

Thus… money from sales, grants, benefactors, philanthropy, even the recruitment of staff and volunteers – all those are in the Gathering Stage.

The good feelings generated by what money you can keep in reserve, staff appreciation, including expressing that appreciation of the skills and contributions of people at all levels in the organisation, that whole wonderful idea of suppliers getting a sustainable and comfortable return for their work, the enjoyment of customers getting value for money, community involvement where applicable, the soaking up appreciating the heck out of the money and every thread of all the people – that’s in the Soaking Stage.

The value you give to your customers or clients, the paying of the staff and suppliers, and even volunteers for those organisations that have them, because the value you give is not always in money – that’s all in the Flushing Stage.

How the Wetlands Model helps you to problem solve

When the Wetlands Model is applied to business, it’s a strategic planning model that embodies the entire circle of environmental and economic sustainability that’s rarely seen so clearly and easily.

Can you see how the Wetlands Model can help you to think about WHERE ON THE CIRCUIT IS THE PROBLEM REALLY? Which elements of the model are out of balance?  Where on the Wetlands Model are the things that need strategic attention to bring the business back into balance? And what are the priorities to achieve that balance FAST?  Can you see how this can help you identify where the problem really is?

Let’s take customers as an example.  Not enough money and less customers in the Gathering Stage might be the FACT.  But the cause of the problem could well be in the Soaking or Flushing Stages – and if that’s the case, then all the new product and marketing ideas in the world aren’t going to fill up that leaky bucket.

There’s a MOMENTUM that develops when the business is in balance on that Wetlands Model.

So… where on the Wetlands Model are the things that need to change, in order to get that balanced, sustainable momentum back?  Or to find it in the first place? 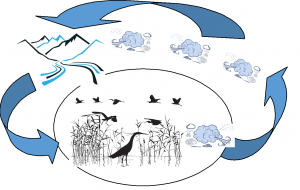 Other applications of the Wetlands Model

The Wetlands Model can be applied in all kinds of other situations where we want environmental and economic sustainability.

We can also apply the model in some interesting areas where we want to find that same sustainability and balance and on-going flow – to problem solve for conflict resolution, complex international relationships – even personal relationships and personal finances.

Social justice in all its forms is also one of the inner circuits of the overall Wetlands Model – the model applies wherever we want sustainability and on-going flow.

Then we have Wetlands circuits WITHIN a Wetlands Model.

Staff and the Wetlands Model

Staff have a Gathering Stage – which involves recruitment,  for some organisations that means attracting volunteers – and it includes the effort they make on behalf of the business.

A Soaking Stage – which involves training, appreciating the heck out of them and the essentialness of what they do, working out what motivates and fulfills each of them, generally nurturing them.

A Flushing Stage – which involves paying them with the kind of rewards and the kind of $ that values them and has enough energy to drive those clouds around back to the top of the mountain again to produce more effort in your business in a way that is BALANCED and thus has MOMENTUM.

Suppliers and the Wetlands Model

All kinds of supplies coming in are part of the Gathering Stage.

The enjoyable and timely payment of suppliers is in the Flushing Stage, with the fair payment / good money and the energy that brings, has to create enough momentum to drive those clouds around to the top of the mountains and rain on them again.

Customers are another mini Wetlands within the Wetlands Model

You gather your customers / clients and their money in.

You appreciate the heck out of them, figure out how to motivate, keep motivating and nurture them as part of the Soaking Stage.  Things like quality, presentation, the specifics of what goes into what you supply to your customers or clients – these are all part of the soaking / appreciating stage.

Then you provide them with beautiful product for a dollar value that has enough energy and momentum in the Flushing Stage, to drive those clouds all the way round to the top of the mountains again.