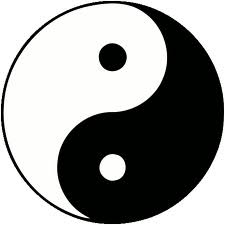 I’ve had one of those ahhaaa expansive insights that tells me that the yin yang symbol is a picture of the brain.  That line where the two halves meet – where we can access the integration of the left and right hemispheres of the brain – has a kind of tautness, a powerful energy that brings us whatever it is that we need in the moment.  It can be healing for ourselves, it brings us understanding of other/s as the necessary  foundation for conflict resolution, it accesses a deep well of creativity that is connected to MUCH more than ourselves, it accesses a deep well of divine connection for solving even difficult problems – even seemingly insoluble problems.

In addition to these INTERNAL things, it brings into play around us, EXTERNAL changes –  it can bring healing for others, in terms of conflict resolution, the changes in us bring a tendency towards balance to the other (BE the change that we want to see in the world), and external events line up to bring us what we want – i.e manifesting.

Our ability to access that energy, I’ve taken to calling the Einstein Factor.

When I went on the internet to find how old the yin yang symbol was, I found some philosophy texts that suggest I’m not the first one to get various aspects of that insight – not surprising since there’s 3,500 years of philosophical thought around it!

Click here to go back to the Einstein Factor Master Page