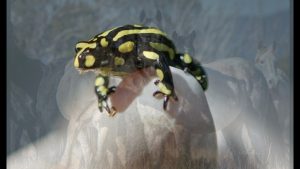 USE that anger, USE that betrayal, USE that grief and USE that frustration to change something. It only overwhelms us when we do nothing. Read that again folks, because that’s really important. We only get overwhelmed when we get bogged down in doing nothing.  And each person’s contribution to the world that we want will be individual.

Your contribution might not be to protest, but it might be to share on facebook or write a letter to your member of parliament.  Writing may not be your thing, but you might be able to contribute a cup of coffee to the legal fighting funds.  Whatever you choose to do with the positive energy of “THIS is for ME to do”, will add to a roar that WILL be heard and WILL be acted on.  Win or lose the court case this week, when people power unites, it WILL happen.

I call this Cascade’s Song.  Renae, the singer / songwriter connected with a brumby from Guy Fawkes called Cascade, who was here at a clinic last year. She connected with him so deeply that the song just poured out of her heart through her tears and gosh it shows hey?

Cascade had lost his entire family in the Guy Fawkes massacre that the RSPCA originally charged the government with 200 and something charges of animal cruelty that horrified even some of the shooters and the farmers who came along afterwards talk about still having nightmares about.  The case got plea bargained (not sure if that’s the right word in AUS!) to save the courts time – plea bargained down to one count that was so horrifying that I’m not even going to describe it here, you have to sleep tonight.

Michelle J, the photographer and her husband Ian, go deep into the high country for the photographs that you see on this video.  The wild horses know them so well and are mostly at ease in their presence – which is why she gets such special photos.

Michelle was up in the mountains with the brumbies when she got her first look at this video this morning and she cried.

I want to thank, deeply these incredibly special women, for lending their passion and their talent to create an energy in this project that is both outraged and yet positive.

Find your peace of mind by figuring out the part that you individually are meant to play in creating a world where our 4 legged furry and even our hopping, flying and crawling friends are treated with kindness and compassion. Write an email, sign a petition, donate a cup of coffee to the legal fighting funds (if you’ve got limited funds don’t give it to the petition website 🙂 ) , stand with us at the protests, share and comment on our posts to make them go viral and flow the outrage out to the world.

Brumby Lives Matter Facebook page has a list in a pinned post of things you can do and people to write to (although don’t limit yourself, get creative!) And right now, May 2020 a high country cattleman named Phil Maguire has put everything on the line looking for an injunction from the Supreme Court to stop Parks from starting the shooting next week.  The final decision on that is due this Friday 29th May.  Contributing to his legal fund would be a wonderful thing to do if that’s one of the things that feels good.  Here’s the gofundme page.

Whatever you choose to do, make sure it feels GOOD.  And win or lose in court – united people power WILL make a difference.  Update – this video has now passed 10,500 views in under 24 hours across Facebook and Youtube (and Youtube had a late start).  We’re going viral folks and People Power is in action!

Tell the government, ROAR IT.
“You don’t get to do death and terror in my name”.