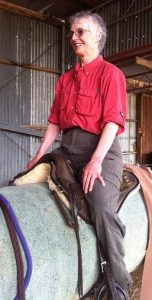 The anatomy of miracles – what’s common to them?

See… what other people call miracles, I call normal. Don’t get me wrong, I appreciate the heck out of every one of the err… dozens and dozens, hundreds even? extraordinary healings I’ve played a part in over three decades. I’ve been reflecting on what’s common to all these “miraculous” healings.

Who could have guessed twelve years ago, that such a simple request in a horse clinic that was already a blaze of joyfulness, would change my life forever and hers too? Cheryl wanted to get her co-ordination happening for getting on her horse from the off side, because her arm didn’t work properly. She’d had a bad injury from a fall off her horse back in New Zealand, that had resulted in a thin and visibly damaged arm that was so weak that she couldn’t hold the weight of a cup of tea.

It’s hard on a horse when we use them to practice something like that, so I had the idea to pull out my steel vaulting horse (pictured here with Clara from Alaska), strap a saddle on and practice without a horse first.

Picture it. Here we were, surrounded by hay and horse stuff in one half of the shed and my husband’s mechanical workshop stuff in the other half. Old hay sheds in AUS seem to play a big part in my stories lol! I’m sitting on a bucket beside the vaulting horse, holding the stirrup to make sure the saddle doesn’t move and Cheryl starts walking around to the off side to get on.

Blehhhh…. She started almost gagging, she felt so sick. As she stepped away from that feeling, she felt better. When she stepped forwards again to come to the right hand side of this “horse”, she felt sick again. It didn’t take long for us to realize that she was being guided to get on from the near side first.

Step by step she was guided by her own feelings to re-create the accident that had crippled her arm. We found the rhythm of approach the “horse”, feel yucky, stop, back away and get another layer of understanding of what had caused that terrible accident and more importantly, how to avoid it happening again.

She had got to the stage of standing up in the stirrup, when I noticed that she was leaning her full weight on her “crippled” arm and that it looked different. “Errr Cheryl… look at your arm”.

I still have this vision of her standing in the stirrup and lifting her arm up with a look of wonder on her face, swivelling her wrist from side to side and watching the blood fill the withered muscles and the arm seem to straighten in front of our eyes.

See… what happened that day was that she understood the purpose of the accident. The flood of understanding around why it happened, the big picture of the benefit of it to her life – all of this released the emotional stress and the physical tension from it that had been stored in her body and her body was able to heal the way it was designed.

“My most clearest memory back to that is the joy. I remember my arm changing. I remember using it and then being surprised I was using it. The memory says I felt strength, my arm felt mine again and felt strong.  I know I was digging into raw places and spaces like we talked about yesterday.  And I know at the core of the onion layers is this raw place where possibility lives.
That’s the magic. My arm was allowed to be …. I was allowed to be …. and we discovered the BE ing of it. X

It was the paradox of healing at work, even if I didn’t understand that at the time.

One day I might talk about more of the so called miracles. The 4 star eventer who released a lifetime of old injuries, also on Magic the vaulting horse. The retired lady from Alaska who arrived creaking and groaning with what she thought was old age, who not only found the bounce in her walk, but also found her youthful pelvic stretch for a beautiful riding seat again. The young farmer whose 20 year old “dead” foot injured from being caught in a harvester, just slid the supposedly fused bones back into place – he could feel his foot and walk normally again. I’ve got hundreds of stories.

The day after reflecting with Cheryl about her breakthrough all those years ago, we were doing a group riding seat lesson over the internet and another lady released an old neck injury that had been plaguing her for years. And just yesterday we were working in a healing session for a donkey with a neurological condition the vet diagnosed as EPM and the lady’s hands were on fire and the energy was so touchable for Caro and I that you could have poked at it with a stick and rolled it along the ground – THAT was also the paradox of healing in action. AND the donkey has dramatically improved.

What I’ve come to understand is that there is a common thread in all these extraordinary healings and it’s what I’m calling the Paradox of Healing. You can find that … I’m going to call it the magic place… where the energy runs so strongly that extraordinary things can happen. You can apply it with your loved ones, with your own horses, or as an addition to any therapy that you already do. You can even apply it to yourself.

Healing is part of what we do here.  Understanding the relationship between horses and humans and stress, has led me to understand that there is a thing I call The Paradox of Healing for both horses and people.  We did a live clinic on it back in February.  Since it was gobsmackingly successful with 36 of the 56 people registered experiencing  some level of spontaneous and profound healing – no doubt we’ll do another.  It’s not scheduled at the moment, so register for the blog to make sure you hear about it when we do.  Or contact me about some private sessions.

Today’s photo: Was taken by me. It’s Clara, the lady from Alaska on the same steel vaulting horse that Cheryl experienced her “miracle” – that we named Magic because magic happens on Magic. And yet it’s not really magic at all, just perfectly normal when you understand and flow with the life and love of the universe.