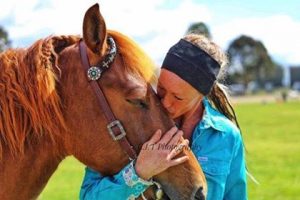 Persuading AJ to tell this story, I had to hold up the “it’s for the brumbies” card.  That was the one thing calculated to over-ride her natural shyness and modesty.  This young woman wouldn’t consider herself a spiritual warrior and yet she’s stepped up with such passion and level headedness and a wide open heart to be exactly that for the brumbies.

AJ and I were text chatting on Messenger one day, when something she said made me ask her to expand on what she meant.  And what you’ll read next is the result.  There’ll be more features about the brumbies coming, as we endeavor to explain exactly what it is that makes them so special and their advocates so passionate.

Straight from the keyboard of Angel Jade Tanner, you can read more about her efforts for the brumbies, at the foot of this blog.

When the wildies first come in, they are fear driven, every new noise even a simple sneeze can startle them and send them into a panic. It’s all new, the environment, the smells, they’re alone with a bipedal predator and they’re trapped, usually in a round yard, holding yard etc.

They watch your every move, their whole body trembles, their ears flick rapidly, you see the whites of their eyes, their sweat… they may pin their ears back, show teeth, turn a rump if you don’t give them enough flight range.. Its fear, nothing else but pure fear.

So that first time you see the ear flick toward you, you can’t help but smile – that’s a give – you understand? So you hold that position, you don’t move a muscle other than the soothing words from your lips “good boy/girl, hi there, good job” .. they stop pacing, they hear you, they hear the calmness of your voice.

They stand still, usually angled slightly away from you, that’s a protection stance, a “ready to flee” again. That is when you step back, lower your gaze, breathe, the moment they first step in to you, give you both ears, both eyes, THAT! OMFG that moment.. your body kind of gets a wave, it’s like they’ve let you into their bubble, into their flight range, into… them.   I can’t explain it, you feel.. warm, your smile is usually beaming towards the ground, tears often follow, but that warmness never leaves you, and every time you take the next step with that wildie it just gets stronger.

The first time they touch with their nose it’s so built up, it’s like electricity is all around you both.

That trust, that connection… it’s like…. it’s like touching the fabric of existence … like the mesh that holds the world together…  I imagine its like being born and taking that first breath – not that I remember that, but it’s what I imagine it to feel like.

I feel blessed to feel that over and over again with each and every brum, its… magical…  It’s life without anything else in the world matters in that one moment. 🤷‍♀️ I can’t describe it….

You feel every cell in your body, every breathe in your lungs, you feel every hair on your arms, legs and head stand on end – hahah the physical reaction is like truly feeling alive for the first time in your life!

Jenny:  I laughed when I got to the part where AJ said “I can’t describe it.”   I thought she described the feeling of being utterly Present VERY well.

Today’s photo:  AJ with Shyla, a brumby trapped from the Kosciosko National Park who now belongs to Jess Wolfe.  This photo was taken when AJ rode her in the national capital championships.

Every year AJ takes in a seriously limited number of brumbies that have been trapped by Parks and need to be re-homed and trains with them to various levels desired by the new owners.  If you’re drawn to horses that have been treated THIS beautifully, then contact me on the contact form at the top of the page and I’ll put you in touch.  You can find out prices and costs etc from her.

She was also one of the organizers of the Melbourne protests at the upcoming brumby culling.  Her mission with the new National Brumby Movement (join them on Facebook) is “to unite representatives of each and every brumby group, members of each and every group, to stand and fight side by side, to work side by side for the common cause.  Working toward humane treatment and sustainable free roaming herds in ALL states and territories for ALL Australian Brumbies.
UNITED WE STAND”

“Just Say YES” is a category established way back at the time of the rollkur outrage as part of a bigger world wide movement to celebrate beautiful horsemanship wherever we saw it and this sure comes into that category.