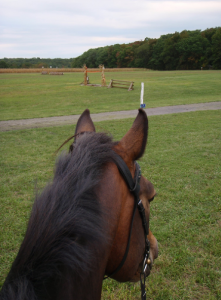 Kim Walnes does periodic reflective posts from her horse Gideon.  I particularly loved this one.

Gideon on being a champion

Kim and I have both been champions in competition, and it sure feels good to know that we have done our very best. However, that is not the type of champion that I am talking about here. I mean the word in the sense of an action: to champion another. To hold the space of Truth for someone else who is having difficulty connecting to that for themselves. And for us other species, that is by far the most rewarding kind of champion to be.

In medieval times, the word “champion” was used more in this fashion. The word “knight” carries the essence of honor with it, and we horses often carried Knights into battles or jousts of honor. Today, when people think of championing a cause, a person, or themselves, they tend to relate to the image of “doing battle” against an “enemy”. However, the times they are a changing…”doing battle” is the old paradigm. It is focused on the “other”—on what is outside yourself that you perceive is “wrong or the enemy”. The real work is on the inside—what you do with your Self. Gandhi had it right when he said, “BE the change you wish to see in the world”. Ah, if you only knew how powerful inner change is…how it truly affects the whole planet!

The whole concept of nobility being contained in a package of suffering or being a Warrior implies struggle, opposition, and pain. These are not in alignment with Divine desire for us, which is harmony and joy. We animals are holding that space for you daily, offering you each moment the opportunity to join us in celebrating life.

As you come to sincerely believe and live your own Truth, it becomes easier to perceive that divinity in others—even when they haven’t a clue and actively persist in clinging to the painful illusions in their lives. It also becomes easier to understand that Divine Timing is a vital part of each being’s process, and that understanding, insight, and integration cannot be rushed. Every person’s process is individual. When we’ve had an epiphany, we tend to not only want to share it with those who are important to us, but to also have them experience it as well.

However, this might not be the right time for them, and your enthusiasm might actually be experienced in another’s perception as being threatening….

Championing is a state of sacred Trust. It is a decision to leave the world of misperception and a choice to become aware of what is real about yourself, another, an event or a belief. It is a state of Grace. And living in that state may require all the courage, determination, and skill of those medieval Knights of old. We are indeed all truly one; yet humans are trained to make judgements, and those set a person apart and “above” another. How can you ever know all that this other being has lived, is feeling, and is experiencing? Judgment leads to more separation. Believe me, even though it may not be conscious, that other being knows they are being judged, and it most often results in defensiveness. As a result, there is even more distance between you.

I remember when Kim first began teaching me about holding the space for another. I was young, and it was with horror that I first observed a human losing their temper and taking it out on their frightened, confused horse. In shock, I stopped in my tracks and demanded that she do something to stop it right then and there. In this particular instance, Kim had already been down that road, and explained to me that this person was not yet ready to hear that there was another way to handle the situation. She taught me that the only thing we could constructively do in this instance was to send compassion to both rider and horse, and to hold in our minds and hearts the image of that horse and rider happily going around in partnership. Holding this vision, internally supporting another rather than judging them, withdrawing from them, or reacting angrily at them, has become the center of our work together.

Standing in the gap for yourself, another, and even the world is one of the noblest tasks ever! You are holding the vision, the space of the Truth in the face of whatever consensus the world presents to you. Instead of buying into that presentation, instead of assuming the worst and jumping on the bandwagon of emotional reaction, you can instead ask the Divine to show you the underlying reality of the situation. You will find that other perspectives will then come to you, and with practice, that this response becomes easier to maintain. With different perspectives, those immediate feelings of fear, anger, self-pity, betrayal become shorter in duration, and calmness begins to gently spread across your heart.

Every day you are faced with countless choices. As you become more and more aware of the divine nature of all beings and make your decisions with that knowledge, you might just find that miracles begin to crowd your days. As you choose within alignment of Truth, your world begins to morph and also come into that alignment. And it can often happen quickly! Patience, compassion, faith, and trust are the keys. I remember Kim coming to the barn one day in a state of amazed, delighted shock. There was a beloved person in her life for whom she’d been holding the space for several years. One day, she recognized that the behavior that drove her crazy in that person was actually a reflection of the way she had been unconsciously treating her own inner divine essence. She immediately began to change her internal dynamic, and within two weeks, that person spontaneously made a total turn around in their actions toward her.

Have fun with championing….Stay true to your divine Self and enjoy coming up with Truth-full visions. It is a central focus of my teachings to Kim, and one that has cultivated much growth in her trust and patience. Be creative, and above all, give yourself permission to enjoy the process!

Photo at the top of the page was taken when a much younger Gideon and I were out for a cross country school, and in the process took a time out to hold the space for someone we did not know who was having trouble communicating with their horse. 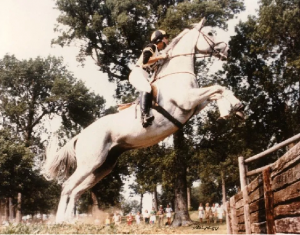 This photo: Kim competed on her legendary horse The Gray Goose in Europe and the United States as a member of the US Equestrian Team from 1980 through 1986.