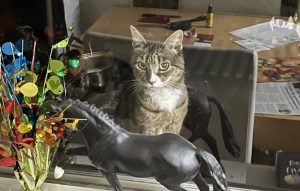 “I feel so helpless” he said.

We were talking about corruption after corruption in politics, inexplicable government inaction on our climate and our planet, the insidious influence of big corporations against the public interest, the spending of billions and billions of dollars of borrowed money to boot the economy from Covid but spending it on things that are going to make climate change worse,  government approval of 850 fracking wells at Narrabri putting Australia’s precious groundwater at risk – the list went on and on and on.

Our agreement was surprising because we come from very different political points of view.  He’d call himself right, these days I’d call myself left.

But here’s where we’re different – I don’t feel helpless at all.

In fact I did a little dance in the kitchen chair while I was saying I don’t feel helpless at all.

See… I don’t have to carry the world on my shoulders – I just have to do my bit.

And when I use my inner guidance system that has been so beautifully developed and refined by the horses, it tells me exactly what I need to do – and when – in order to do my bit about all the things in the world that worry me, all those things that I am passionate about.  It tells me how to problem solve  in my every day routine, with that big picture in the background of my mind, of the kind of world I want to live in and the kind of world I want to leave for my grandchildren. It tells me how to do all that, in harmony with others and in harmony with the earth herself – for a sustainable future.

And my inner guidance system does that at the same time as opening up what I call the infinite possibilities of the universe – with solutions that I may never even have thought of.

It’s the opposite of struggling. It’s a feeling of being inexorably drawn to what I’m looking for, in a powerful current of energy where doing my bit adds to everyone else’s bit, that is in harmony with All that Is.

And we can learn that here, thanks to the grace of horses.

ALL of us are capable of making a very big difference in the world in a very short period of time.  Keep your eye out folks, for the next way that we here are going to be doing it.

Today’s photo is my weird Aussie sense of humor.  It’s a photo I took earlier this year of my 22 year old cat Shadow in the kitchen window, manifesting her umpteenth meal of the day – breakfast, second breakfast, elevenses and so on throughout the day.  She knows EXACTLY how to get what she wants without force or control.  On the windowsill and table in the mirror effect, is Totilus (horses made this possible), Rescue Remedy (how appropriate because the Einstein Factor is like a rescue remedy for the world!), a magazine article on David Attenborough (a rock star of a man who’s been doing his bit), a packet of seeds (for the future), a saucepan (feeding ourselves is a big deal), a pen  (the pen is mightier than the sword), scissors (snip snip!), some sparkly thing that I use to dress the table for celebrations (and yes this kind of power is worth celebrating!) and the corner of a pack of cards called “The Universe Has your Back”.  Yep that’s me here, smiling again…