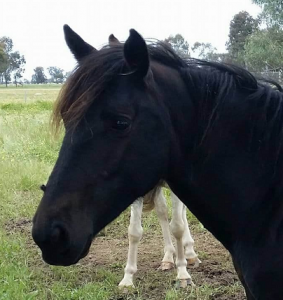 Big expletive alert and a way forwards all in the same article.  Friends on Facebook will be aware that I’ve had the plight of the brumbies on my mind and actions over the last few months. (That’s probably an understatement!)  I’ve gone to protests, recorded them for you, marched and shouted until I was exhausted, written passionate letters, spoken to people, signed petitions, produced a video that I’m really proud of and encouraged others to find the actions they needed to take to be able to come back to peacefulness in a truly awful situation.

I’ve noticed the passionate opposition on both sides of the argument and spent some time musing on how opposition always escalates any situation – just like it does when we’re “training” a horse.  The ” ” is because in MY world it’s often difficult to figure out who is training whom – my horse is my teacher and all that goes with that…

What would it take to DE-escalate the situation and get some reason into the discussion?  Is it too late?  (In my world as long as we’re breathing it’s never too late.)  Do we need new leaders, new researchers and environmentalists with an wholistic approach?  Do we need brand new advice committees with a new constructive energy, horse behavioralists, people with open mind on both sides of the argument, bringing critical thinking and compassion into the situation and to ALL the lives that matter?

Because… just saying… In this oppositional way of approaching the perceived problem, I see lots of anger, lots of frustration, even lots of rage – but very little compassion to ALL those lives involved – animal and people – and very little of the kind of critical thinking and problem solving that’s likely to bring a solution to a problem that has consistently been fought for over 40 years that I know of and maybe longer.

Like attracts like.  That’s WHY direct opposition gets a response of more opposition and escalates a situation.  The fact that  resisting a horse  creates more resistance, that opposition escalates a situation, is exactly what deep thinkers in the horse world have been saying about horse training for years and years.  Gosh why am I surprised that the horses themselves should have the biggest lesson for us here?

Shooting healthy horses is simply not OK, whether it’s chasing terrified horses from a helicopter and the shocking cruelty of a slow painful death, snipers in the dark (same argument) trapping and sending WILD and TERRIFIED ANIMALS long distances in trucks to abattoirs where we’ve seen videos of the horrifying state they arrive in and again shocking footage of kills that aren’t clean and painful and distressing deaths.

Shooting deer and pigs and wild dogs from helicopters isn’t OK either.  That too has the shocking cruelty of unclean kills and is unconscionable.  A hunter told me recently that it’s a common hunting practice to deliberately shoot a pig to wound it, then when it runs back to its family, the hunter can then take the whole family out.  (WTF they really do this?) Pigs are physically one of the closest animals to humans – I don’t know if they still do it these days, but they used to use pig heart valves for human transplants and anyone who’s been around pigs with kindness knows their incredible sentience.

I grew up in a hunting family and a consistent clean kill and instant death was a badge of pride.  Youngsters weren’t even allowed to shoot on a hunt until they were a bloody good shot, reliably.  They ate what they killed, fed the rest to the dogs, and nothing was wasted.  The very idea of deliberate wounding and the pain and distress caused by that would have sickened them and it sickens me.

Cutting the toe off a frog – cutting the toe off many, many frogs to determine how many of their age are in a particular population – that too I consider is unconscionable.  What… the … fuck?  Do they think a frog doesn’t feel pain and distress? How come the Animal Ethics Committee at the Australian National University let that one through the keeper?  As far as I can see it’s actually against their own animal ethics and welfare Code, although I’m waiting to hear back from them about exactly how and why and on what basis they gave the approval for that research.

I’m sorry folks, but anyone involved in that kind of behavior doesn’t really have the love for the animal OR the environment driving their actions – they have a whole lot of fear and other shit going on.   Because love for the horses doesn’t mean hating and destroying someone or something else – that’s not love for the glory of these sentient beings.  I’m shaking my head – whatever it is, it’s not love…

ALL lives matter – the horses, the people, the deer, the pigs, the frogs – every… last… fucking… life… matters.   Embodying compassion for ALL in this disagreement is the one single thing guaranteed to turn this situation around.  Every last human and animal life on ALL sides, filled with well being should be our goal.  Anything less than that hasn’t got a hope in hell of finding a real solution.  Anything less than that and we’ll all still be watching each other across a chasm of anger and destruction in another 40 years time.

So what’s it going to be folks?  Are each of us…  am I… are you… willing to take personal responsibility for the goal of EVERYONE in this disagreement – EVERY person and EVERY animal and even the earth herself filled with well-being?  Is it even possible to have such an outcome?  I don’t know, but I sure as shit know that without such a goal, we haven’t got a hope in hell.

I didn’t know where this article was going when I started writing it, but here we are.  From now on, that’s my goal and my yardstick for my words and actions.

Whew… stepping off the soapbox now…

p.s. Oh yeah, don’t think that compassion doesn’t mean kicking some butt every now and again – it just means that we have that goal firmly in front of us and our hearts and minds wide open while the footy boots are in action.  It’s kicking butt WHEN kicking butt is necessary to reach that goal of well being for ALL.

Back off the soapbox for the time being!

Today’s photo is AJ Tanner’s heart horse the brumby mare Billy Jean.  As a yearling, Billy Jean was attacked by a dog and had part of her face ripped off.  When she was only 7 years old she turned and faced her biggest fear to save AJ’s life.  They were being chased by wild dogs when AJ came off and was laying on the ground with broken bones and blood everywhere and this courageous little mare stood herself between AJ and the dogs and protected her.  This is just the bare bones of a story that I PROMISE  to bring you in full one day soon!