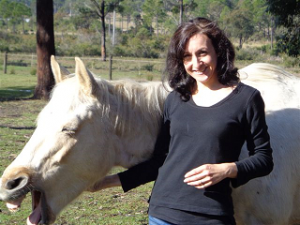 Ahhh I LOVE it!  I see it sooo… often that there’s a gift in the seemingly crappy things that happen.  Who would have thought mozzies could be a gift?  Narel is a brilliant animal communicator and on staff here.

After the drought, then the fires, we received massive amounts of rain. Then following that we have begun to have swarms of mosquitos – and I mean swarms where you cannot stand still as they completely surround and consume you. And we don’t normally have them at all bar the random one buzzing around. Needless to say that our horses are not impressed.

And another thing is that after the massive amounts of rain that followed both drought and fires, is that we now have massive amounts of grass growing. This grass is as a result very stressed (high sugar, and unbalanced in its natural chemical makeup) and it is growing in huge amounts in the horse paddocks.

Now enters the perfection of nature.

So one’s first reaction is to cover up the horses in mesh rugs and reach for the fly spray, however I noticed that on dusk and dawn they had begun a new routine once their mosquito frustration begun. Very long episodes of trotting. The whole herd trotting together, sometimes as a group, sometimes single file, swishing their tails and settling into a really nice rhythm with it too, even to a point of finding their nice balance points and rounding up. This went on for at least an hour, probably longer of an evening, then I would get up in the morning and it would be underway again. They did not seem terribly stressed, and were not panting or sweating, just moving very easily and rhythmically. Our Thoroughbred was actually spending time on her own trotting beautiful, perfect circles one after the other, it was mind boggling to watch.

Then in the morning after a period of time the mosquitos would back right off and the horses would settle down to graze like normal.

And so during these long episodes of trotting, the grass they had been consuming, along with those huge sugar spikes that it carries, with lots of nasty potential health outcomes, was naturally being worked off and out of their system.

Then enter the third part of the deal. As our dam is contaminated from the fires and full of ash which breeds bacteria, it is still off limits. We are buying in water and hand watering the horses morning and night. Again, something that could be a stressful nuisance situation, however whilst I fill up the water trough, I too am unable to stand still in the mosquitos and fill it, so guess what I do?

I trot too! Joining with the herd, I jog along with them following their trails around paddocks, along lane ways, back past the water trough to check its progress then onwards.

All the while this is going on I am getting some exercise that I have been lamenting not having enough time for lately, and I also am “doing” a further layer I did not realise I needed to work on, about moving in amongst the herd of 8 horses at higher energy when there is the mosquito frustration in them during that time driving the movement.

So really, a crappy situation is just bursting full of gifts and I am actually quite cherishing our current morning and evening routine, knowing it too will pass before too long and a new opportunity will come along instead.

What experiences have YOU had where something seemed crappy but there was a gift in it?

And even more importantly, how has LOOKING for the gift in the something that seemed crappy, turned it into a great situation faster?

See you in the comments!