Here’s another article dug up from the back end of the website as I got the new website ready.

Orion and Angela, bless both of them… This is another case where I get all warm and fuzzy just thinking about them.

Angela had spent thousands and thousands and even more thousands of dollars on vast amounts of training from some very talented trainers, most of which training had disappeared within weeks of coming home.

Angela brought Orion to us to work on his chronic barging – these are the extreme cases of pushy horses.  A barger is a horse who barges into your space, crowds you, pushes you physically out of the way – and pushing was something Orion did very well – even to the extent of running over the top of you. If you’ve ever been on the receiving end of this, you’ll know that it’s not pleasant and it’s seriously not safe.

We thought at first that this was a clear question of unacceptable behavior and that the solution would be to figure out how far away we wanted him, ask him gently and consistently to keep his distance and enforce that.

As Angela worked with Orion, establishing clear boundaries that this barging was unacceptable, we had a moment of enlightenment that changed the way we saw everything.  (Those moments of enlightenment happen routinely when you work with Feel.)

Our big realization was that Orion was simply afraid and he had been bred to push through when he was afraid.

The harder the humans tried to stop it – the bigger and tougher and stronger and harder they got – the more they punished him – the more afraid and confused he was and the more he pushed and barged.

Even now, editing this all these years later, I feel so sad for horses like Orion – punished for being afraid and confused. 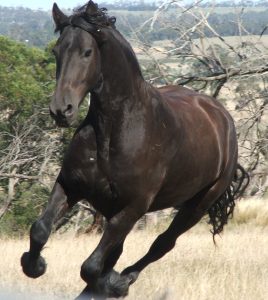 Orion is a Friesian. He comes from a long line of war horses who have been bred for hundreds if not thousands of years for their ability to keep doing whatever they were trained for, even when they were terrified. I can almost see them now, battle lines of war horses, pushing forwards through the noise and the cannon fire and the smoke – afraid, but using those massive chests to just barge through whatever was in the way. This was such a useful trait in a war horse that they selectively bred for it.

Note to owners of pushy horses –  it’s not just war horses, ALL the breeds that used to be carriage horses were bred the same way, for their ability to keep pushing forward even when they were afraid or confused.  It was what made them good at their jobs.

I call them the Warrior horses now. 🙂 Orion turned out to be the most amazing horse. He’s funny, quirky, incredibly powerful, soft and even when he was completely green, he looked after his green rider to the millionth degree.  And co-operative – OMGoodness – one day in a clinic I was horsing around at the end of demonstrating something to his owner, flung my own legs out in a Spanish Walk and Orion did the Spanish Walk too.  He makes my heart melt even all these years later.

It’s funny how once I understood what was going on with Orion I have seen similar things with sooo… many other horses. Sooo… misunderstood, because they cannot think when they are afraid, so they simply CAN’T figure out what the heck you want.

So how did we change the pushy barging?

It wasn’t rocket science once we understood where he was coming from. The solution was in what I call his Deep Comfort Zone – that’s a place of super confidence in his human and the super connected / listening way she was working with him, peacefulness, curiosity about what’s happening, excitement, even joy.  In that Deep Comfort Zone he could  release all the crappy, scarey training he’d had in the past – EVEN WIPING THE SLATE CLEAN.

Do you get how BIG that is?  That you can wipe away all the resistance and fear and stress and tension from that crappy training from this super connected place of BEing with a horse?

So not only can you communicate and change the dangerous pushy barging behavior, you can help your horse release all the stress and consequent physical tension of that crappy old training – so that there’s just this beautiful way of being with each other left?

If you don’t know us yet, start with the free video The Key to the Kingdom of Horses.

Fast Track to Brilliant Riding is the program that’s going to give you ALL the skills and the Feel that is necessary to solve this problem and any other that comes up, in the gentle and enlightened way that we like to do things here – so keep your eye out for that program!